Industries
WiFi for Sport Venues
Stadium WiFi Deployments
WiFi for Transportation
Challenges of WiFi Access in Transportation
WiFi for Shopping Malls
Shopping Center of the 21st Century: 3 Important Marketing Practices
Shopping Center of the 21st Century: 3 Must-Have Marketing Tools
WiFi for Restaurants
5 Reasons to Implement WiFi in a Restaurant
WiFi for Hotels
How to Build Well-Designed WiFi in Hotels
3 Most Common Complaints of Hotel Guests - WiFi, WiFi and WiFi
How and Why Hotels Should Oppose OTAs?

Stadium WiFi solutions are quite a new thing. One of initial limiting factors was their scale - a large area with thousands of WiFi users, and data transfer measured in terabytes. Good hardware and planning are crucial in order to handle such high density WiFi network. Let's take a look at how stadium WiFi deployments evolved over time. 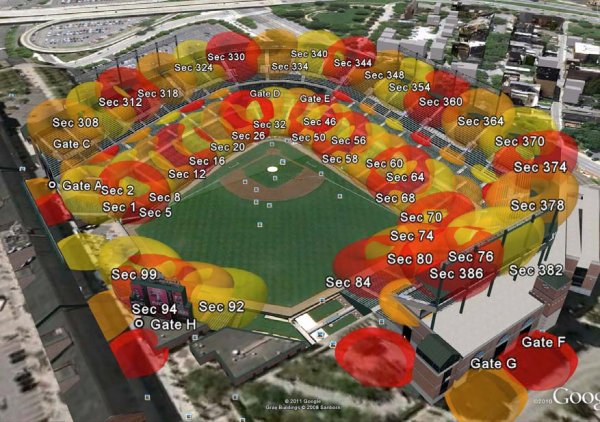 WiFi deployments on stadiums and similar locations started with overhead installations - access points were mounted on ceilings and roofs behind stands. Those places are easy to access and wire. Special directional antennas covered a section of the stands. It worked, however there were a couple of issues; people in the lowest rows had a much greater distance to the access point and thus less efficient connection. What is more, each access point had a relatively big section to cover.

To solve the problem of front rows front and back installations showed up - additional access points were installed from the front and directed into the stands. That made deployment way harder and more expensive but solved most of the problems.

Going even further to improve network quality, In-Fill deployments were used with access points mounted in the middle of the stands, or in less accessible places. It wasn't optimal, but it did what was necessary... until more content started to show up through WiFi - replays, food ordering, event agenda and so on. When people started using WiFi to access those extra features, the throughput was too low, and a new specialized solution had to be invented.

Large stadiums and high density public areas requirements caused some network companies to specialize in solutions for them. We've got Proximate Networks - a much larger mesh network of access points is used and mounted either under the seats or just next to them (e.g. on the rails). Each access point covers smaller area and human bodies scatter radio signals from the to get a uniform signal over all stands.